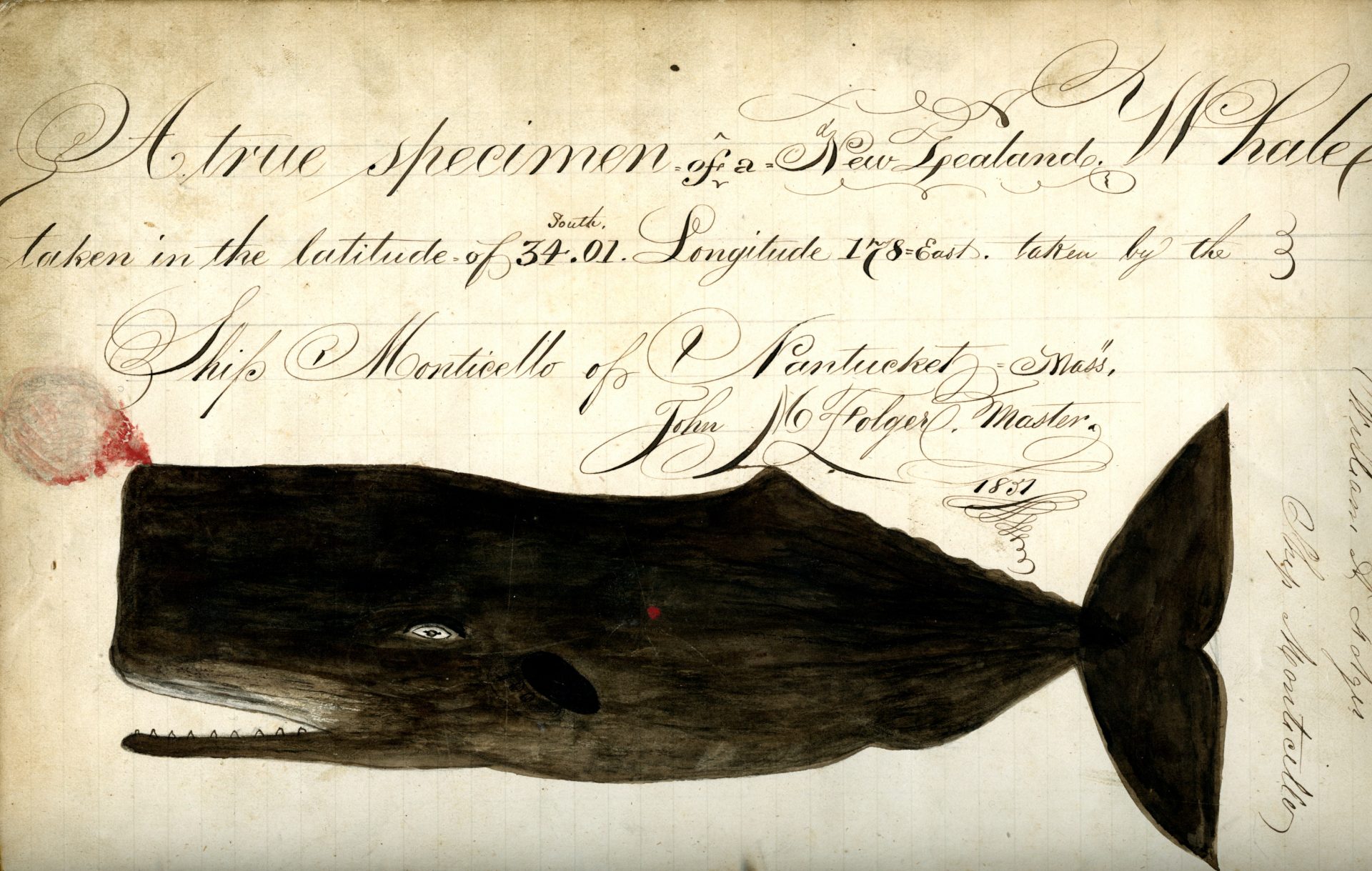 Introduction to Reading Logbooks and Journals

Introduction to Whaling Logbooks and Journals

A logbook is the official record of the activities of a whaling voyage. It was the duty of the chief (first) mate (also just called “mate”) to keep the log on a daily basis.

It includes the position of the vessel, the sail she was under, the wind speed and direction, the activities of the crew, and any whales seen or taken. In contrast, a journal was an unofficial document that could be kept by anyone. Often journals were written similarly to logbooks, with daily entries giving the same information contained in a logbook, and in some cases the only way to determine if something is a logbook or a journal is to check the name of the author against the crew list and see if it was written by the chief mate.

Whaling logbooks and journals give a unique perspective as to what life was like aboard a whaling vessel. Like many old documents they are not as accessible as modern writing, being handwritten in cursive, often on paper that has been damaged over the years, sometimes in pencil or faded ink, and the writers usually did not use standardized spelling. Nevertheless, a lot of valuable information can be found inside these records of past whaling voyages, and as such they deserve our attention and are worth the effort that it takes to read them.

The beginning of an entry

Most entries will start with the day of the week and date. From there, they will have an introductory phrase, the most common ones being “comes with,” “commences with,” “these 24 [h]ours,” “[on] this day,” or “first part.” The log keeper (also known as just “keeper”) will then describe the weather, which usually includes the wind speed and location. He often will write about the weather again in the later part of the day.

Typical activities for a crew member

The keeper will write what activities he and the rest of the crew performed throughout the day. On most days the crew would not be whaling, but would be employed in various types of work on the vessel. They could adjust sails (see the glossary below), clean various parts of the vessel, paint the vessel or the boats, “stow” (store) casks of food and other supplies, “break out” (bring up) supplies, pump out water, or repair parts of the vessel. They also sometimes wrote they were employed in “ship’s duty” which could mean any of the above activities. Crew members spent hours making twine (called “spunyarn”). Some were craftsmen like blacksmiths, coopers, or carpenters. Sometimes the crew would spend time “scrimshonting” or created scrimshaw, though the latter activity was rarely documented.

When a whale was “raised” that is, spied from aloft either spouting, turning flukes or breaching out of the water, the crew men would then “lower away” the whales (short for lowering the whale boats from the vessel to the water). A whaling vessel could have between three and five whale boats: the bow boat, waist boat, larboard boat, starboard boat and sometimes a starboard bow boat. Each boat was staffed by six men; five would row the boat and the sixth, the boat-header, would steer. He would also be responsible for killing the whale after the boat-steerer harpooned it. Sometimes the boat’s crew “struck and drew” meaning that the iron came out and they lost the whale. They also “struck and sunk,” meaning the whale sunk to the bottom of the ocean and was lost. Sometimes the whale “took the line,” which is to say they swam away with the harpoon and rope still attached, and were able to get it free from the whale boat. When a whaling boat was successful they “saved” or “took” (caught) the whale and “took it alongside” the ship. They would then “cut [the whale] in,” cutting the whale’s flesh into many smaller pieces so it could be brought onboard. They would then spend the next several hours and sometimes days boiling the blubber in order to turn it into oil. The oil was then stowed in casks. They would also take the whale bone and scrape it clean, and then bundle it for sale.

Encounters with other vessels

Whalers also encountered other vessels. Sometimes they would “speak” another vessel, which means they would call out to the other vessel as they passed by it. Occasionally they would “gam,” which means the captains and first officers, and occasionally other crew members, would go on board and visit the other vessel. Sometimes they just exchanged signals, that is, flew flags of a certain kind that conveyed specific messages.
A ship is a specific type of whaling vessel. Whaling vessels were distinguished by what type of rigging they had. The main types of whaling vessels were ships, barks (also spelled “barque”), brigs, and schooners. Additionally there were brigantines and sloops. Occasionally vessel would encounter barkentines in the Western Arctic, but these were rarely used for whaling voyages. Later vessels that used steam power were usually referred to as “steamers” but also had the traditional rigging, so there are steam barks, steam barkentines, steam brigs, steam brigantines, and steam schooners. All of these fell under the heading of steamer, and thus if a keeper mentions a steamer there is no way of telling what kind of steam vessel they saw or interacted with without looking the vessel up.4

Whaling vessels would often make port, or set anchor and go ashore. Sometimes it can be difficult to figure out the place in question because the place was known by a different name then than it is now, the keeper had poor handwriting, the keeper spelled the place incorrectly, or because place names are less commonly found than other words in whaling logbooks and journals, which makes them harder to recognize. The longitude and latitude of a ship can be used to find a place, but that information is not always readily available. Mapping out the route that the vessel followed is another good way of deciphering a place name.

In order to get to a port, whaling vessels would often employ the services of a pilot. The pilot was someone who was very familiar with the waters in the area and not a member of the crew. When on land whalers would acquire provisions (especially food), would be “at liberty” (i.e. given time off), would socialize with the crew of other vessels at that port, would hunt, or would interact with indigenous people in the area. A common problem while on land was desertion; crew members would run away from the ship mid-voyage because they did not enjoy life aboard a whaling ship. Complaints included quality of food, the difficulty of the work, and homesickness. Sometimes deserters would be caught and punished, but often they got away. Captains would often “ship” (send home) oil that they had collected, putting it aboard vessels that were going to head home. They also shipped men who were ill or injured and unable to perform their duties.

During the last decade of the 19th century, many whalers who were traveling in the North Pacific and Arctic oceans “wintered” (spent the winter) on Herschel Island in the Beaufort Sea. They would stay there for several months between whaling seasons. The crews of the different vessels got together and played baseball and board games, had dances, ate together, and socialized in general. They also hunted for food together, and men would go on hunting expeditions that typically lasted for a few days. Unfortunately, this cold climate was dangerous, and many men succumbed to frostbite or died of the cold while wintering on Herschel Island.

The activities mentioned thus far are normal on whaling voyages, but there were a lot of other events that happened as well, and these are detailed in many journals and some logbooks. Accidents at sea were very common, often leading to the injury or death of crewmen. Sometimes the books include descriptions of shipboard medicine that was performed on crew members, which included treatment for scurvy and amputations (the latter usually for frostbite). Sometimes captains would bring aboard their wives and children, and occasionally they appear in logbooks and journals. Occasionally crew members would fight with each other or speak disrespectfully of the captain or officers. This would result in punishment, usually by being tied in the rigging, flogged, and/or put in irons (manacles). Shipwrecks also happened, as well as vessels being trapped in ice while in the Arctic Ocean and sometimes subsequently being abandoned.

Some logbooks and journals have drawings and/or stamps in them. Whale stamps were the most common; these are pieces of wood, bone or ivory cut to look like certain species of whales. They would be used to keep track of when whales were taken, or sometimes the keeper would just stamp the tail when a whale had gotten away. However, most log keepers did not use the stamps consistently, and would either not stamp every time they caught a whale, or would sometimes stamp when they had only seen a whale. As such, the whale stamps cannot be reliably used as an indicator of whales seen or taken. Log keepers occasionally used ship stamps (which looked like whaling vessels) to record speaking to and gamming with other vessels. Whale drawings and ship drawings were often used in place of whale and ship stamps. Finally, some logbooks have profile drawings of land masses seen.

Because paper was a valuable resource in the 19th century, sometimes whaling journals would be used for other purposes before, during, or after they were used to record a voyage. They may contain school notes, copies of literature, poetry, or prayers.

Many logbook entries end with the longitude and latitude of where the vessel was that day. Sometimes they also mention the distance they are from certain landmarks, or the barometer readings.

Glossary of terms and phrases frequently mentioned in whaling logbooks

1  No one is quite sure what log keepers were speaking of when they mention “grampuses” but they are referring to some small cetaceans.
2  Or whale-like cetaceans
3  Not to be confused with the devil ray (Mobula mobular) which is also sometimes called a devil fish.
Starbuck, A. (1989). History of the American Whale Fishery. Secaucus, NJ: Castle Books.
4  A good source for this is Judy Lund’s American Offshore Whaling Voyages 1667 to 1927 (volumes I and II).