An introduction to the essential tools – the vessels – and terminology used aboard a whaling voyage.

A Brief Look at Shipboard Terms  |  Ships  |  The Whaleboat

A whaleship was a floating community with its own rules and language. Landlubbers (land dwellers or new seamen) may need a guide to shipboard lingo:

Abaft: To the rear of or in the direction of the stern (rear) of the ship.

Aft: At, near, or toward the stern (rear) of a vessel; opposite of forward.

After House: The name given to a square or rectangular cabin built on deck near the middle of a whaleship. It was used as a place to get out of the weather or as a privy.

Aloft: Above the deck in the rigging.

Amidships: In the middle of the ship.

Boom: A sturdy pole, attached to the foot (bottom) of a fore-and-aft sail (see below), used for spreading and maneuvering the sail.

Bow: (Pronounced as in “take a bow”) The front end of a boat or ship.

Braces: Ropes to move the yards in a horizontal plane.

Crow’s Nest: Originally a barrel lashed at the top-gallant mast (the highest section of the mainmast) where a man was stationed to look for whales or ice. Usually only employed in the Arctic and Antarctic fisheries.

Decks: The “floors” of a ship.

Figurehead: A carved decoration on the bow (front) of the ship.

Forward: Opposite of aft; front section of vessel. Fore: Indicates part of the hull, rigging, or equipment located at, near, or toward the forward end of a ship.

Gam: An exchange of visits at sea by the crews of two or more whaleships.
The Gamming Chair at left was used to transport individuals from one ship to another. 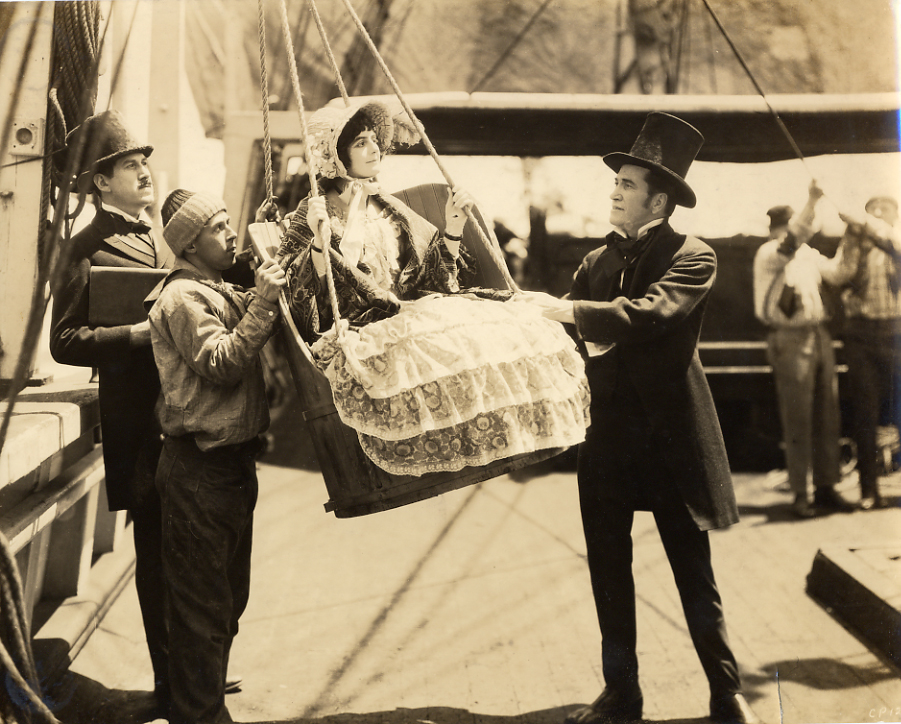 Keel: A long structural timber running along the outside of the bottom of a ship from front to back – “from stem (another nautical term for front) to stern” (back or rear).

Leeward: Pronounced “loo’ ard.” The side away from the prevailing wind.

Mast: An upright pole for supporting sails and ropes. A mast may be a single pole or number of poles in consecutive extension, one on top of the other. Each mast has a name determined by its height, such as “lowermast” or “topmast,” or its position, such as the “mainmast,” which was usually the second mast from the front of a three-masted ship.

Port: The left side of a ship, as the steersman stands facing forward. In earlier times, called “larboard.”

Rig: The distinctive arrangement of masts, rigging, and sails that indicates a type of vessel, such as a bark or schooner.

Spar: A general term for a strong pole used in the rig of a ship. Depending on its position and use, a spar may be called a boom, gaff, mast, yard, etc.

Spyglass: A small telescope often used by the captain on the bridge.

Square-rigged: A ship on which some of the principal sails are square in shape and hang across the deck, rather than running with the keel (as in a fore-and-aft-rigged ship.)

Starboard: The right side of a ship, as the steersman stands facing forward.

Stern: The rear of a ship.

Tack: To sail a zigzag course, as nearly as possible into the wind, to reach one’s destination. (A ship cannot sail directly into the wind.)

Tonnage: The carrying capacity of a ship (not its weight).

Windward: The side against which the wind is blowing.

Yards: Horizontal poles which cross the mast and support the sails on a square-rigged vessel. The ends are known as “yardarms.”

Barks and Brigs, Ships and Schooners

Floating factory
The Yankee whaler was a highly evolved vessel that incorporated a variety of technological details that served to distinguish it from any other type of craft. It was designed to carry a large crew of men (up to 35 individuals) who would process and store materials obtained in the hunt over a period of years. Here it must be said that not all whalers were built for the purpose of whaling. Many were converted to whaling from their previous uses in the merchant service. All whalers, regardless of previous use had various details making them unique. The most conspicuous feature was the brick furnace called the try works located just behind the foremast. Whalers also had three to five whaleboats hanging from big wooden davits on both sides of the vessel; two upside-down spare boats sitting atop a wooden frame mounted on the deck, and a deep and capacious hold where the large casks of oil could be stored. At sea a whaler could be distinguished by its slow speed, possibly a plume of smoke rising from the try-works and the men stationed at the top of each mast looking out for whales. While cutting-in a whale the large and heavy industrial-grade blocks and the men standing on boards over the side of the vessels wielding long-handled spades and the large group of men in the bow of the vessel heaving at the windlass marked the ship as a whaler. Many whalers were painted with false gun ports for purposes of disguise and intimidation from a distance. This painting scheme could deter pirates on the high seas or hostile peoples encountered at the many remote landfalls commonly frequented by these vessels. The average square-rigged whaleship was about 100 feet long and 300 tons carrying capacity. (see illustration below, “Cutting in a Whale”)

Ship
This type of vessel has three masts, each with topmast and topgallant mast and square-rigged on all three masts. Ships often carried four boats, sometimes five and had the largest number of crew. There were six men per boat plus the ship-keepers, men who stayed aboard the vessel when the boats were down after whales. Ship-keepers included the steward, cook, cooper, blacksmith or carpenter. There could be as many as 37 people on board a ship.

Barks
Very similar to a ship rig in that it was a sailing vessel with three masts, square-rigged on the fore and main masts and fore-and-aft rigged on the mizzenmast. This rig became very popular in the mid-19th century as it required fewer crew to handle the sails when the boats were down for whales, thus saving the owners money. See the Museum’s half-scale model of the Bark Lagoda.

Brigs
The true brig is a two-masted vessel square-rigged on both fore and main masts. Brigs were most often employed in shorter voyages to the Atlantic Ocean and saw use throughout the 19th century.

Schooners
The schooner was the smallest of the whalers, usually with two masts and four-and-aft rigged sails and carrying two or three whaleboats. Six months was the ordinary length of voyage and most schooners were employed in the Atlantic. Although the schooner was employed throughout the history of Yankee whaling it was especially favored in the later period (1890-1925), because it was economical to outfit.

Classic design
Whaleboat builders refined the craft’s design, shaping it into a dependable means of getting close enough to a whale for the kill. A whaleship sailed with three to five whaleboats swinging from davits (cranes used on ships). Spares, usually two, were stowed on top of the after house at midship.

Sleek lines gave these boats beauty as well as speed and maneuverability. Their uncomplicated design made them easy to repair – important on long voyages, because whaleboats were often damaged during encounters with whales.

Each whaleboat had a crew of six
The boatheader, usually the captain or one of the mates, stood on a narrow piece of wood across the stern (rear), handled the steering oar, and commanded the boat; The harpooneer or boatsteerer pulled the bow oar up front and four crewmen rowed with oars that were balanced in length so the boat could be rowed equally well by four or five men.

The right equipment was essential
Each whaleboat carried: