Was New England the Promised Land? Not for everyone, or at least not immediately!

The Pilgrims, a small group, came here seeking religious freedom for themselves and were, not surprisingly, intolerant of other religions.

The Puritans however, combined their religious doctrine with their system of government. The Massachusetts Bay Colony was a Puritan theocracy and non Puritans like Quakers, Catholics (Papists) and others were banished from Boston and surrounding regions. Anyone who did not agree with or follow the Puritan lifestyle, be it religious or political, was driven out, often violently. If you were a Quaker, a Baptist or a different kind of Protestant, you were not welcome in Massachusetts and could suffer beatings, imprisonment or even hanging.

The Quakers were particularly detested and, since they were forced to settle places where they were tolerated, such as Newport in the Rhode Island Colony and “away off shore” on the island of Nantucket, seafaring, and later whaling, became a way of life.

Throughout the exhibit, you’ll see how marginalizing the Quaker colonists led them to seek their living from the sea, to settle areas with certain advantages for maritime trade and ultimately, to make New Bedford the whaling capital of the world.

Questions to consider:
Do we experience extreme religious viewpoints in the U.S.A. today?
Why is religious freedom important?
Why is it important for governments to separate church and state? 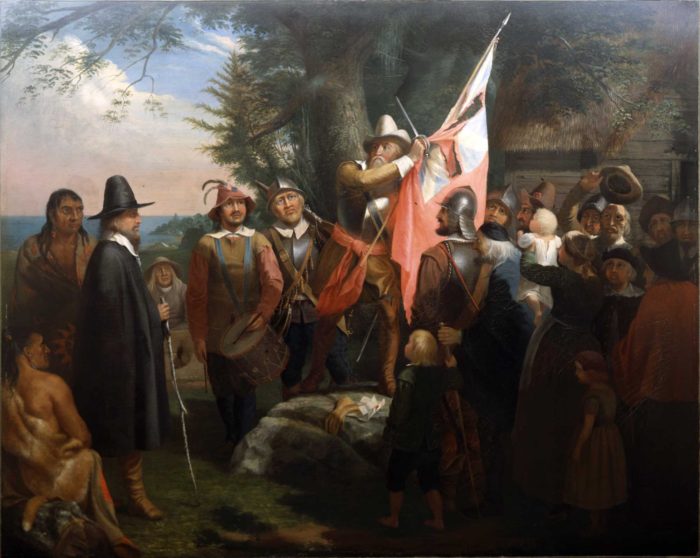 This painting portrays Massachusetts Bay Colony Governor, John Endicott, famously desecrating the English flag in 1635. It foretells the independence of spirit that comes with living in America, thousands of miles away from mother England. Roger Williams (in black) was a teacher and theologian, also a fiery Protestant whose beliefs in religious tolerance and peaceful coexistence with the surrounding Native tribes led to his banishment from the Massachusetts Bay Colony and his subsequent establishment of the Rhode Island Colony.

Learn more about the key figures in this painting…
Who was John Endicott?

Encouraged by the extreme Protestant preaching of Roger Williams and irate at a message from King Charles I of England that both Williams and Endicott perceived as “papist” (that is, conforming to the edicts of the Catholic Church in Rome), John Endicott in 1634 cut the cross of St. George out of the Flag of England in an act of religious and political defiance.

Endicott was intolerant of Native Americans, Catholics and especially Quakers, putting several to death in the course of his career.

Wall, taking liberty with Hawthorne’s text, put a Quaker in the scene at lower left even though Quakers as a group would not come into being for another 13 years. Religion during the 1600s in England was a tumultuous battleground of belief, reform and re-organization.  The Anglican (Church of England), Roman Catholic and Protestant churches vied for political power and influence.

Religious groups not in complete agreement with the predominant three religions were often persecuted.  Many fled to the New World seeking freedom of worship along with new economic opportunities.  These were some of the brave souls who risked all to become the colonial settlers of Massachusetts and later, Rhode Island.

Because Pilgrims were Separatists from the Church of England, they were committing treason as there was no separation between the church and the state.  In fleeing persecution, the Pilgrims first moved to the Netherlands, a country that allowed them to worship as they wished.  But the Pilgrims wanted to live as Englishmen and so decided to start an English settlement in the New World.  They decided upon “Northern Virginia” (the earlier name for New England) in order to be far away from the Spanish enclave of St. Augustine in Florida, which was Catholic.

In 1620, the Pilgrims set sail for New Amsterdam where the Dutch authorities were lenient (being a colony of the Netherlands).  But, due to bad weather and poor charts, they wound up on the shores of Cape Cod and shortly thereafter, found the harbor at Plymouth.  They started their new settlement by an abandoned Wampanoag village. The Puritans had no tolerance for any behavior that departed from their own strict moral principles which banned “frivolous” pursuits such as playing card games.  They advocated the subservient role of women to their husbands, mandatory education for children and strict adherence to the Bible.

Governor John Endicott of the Massachusetts Bay Colony was a stern Puritan and responsible for banishing many opposition thinkers, like Roger Williams, who founded the settlement of Rhode Island in 1636.  Quite unlike the neighboring Massachusetts colonies, Williams wanted Rhode Island to be tolerant and allow Quakers, Jews, Baptists and others.  He also advocated paying Native Americans for their lands.

Read about the Antinomian Controversy (1636-1638) which led to banishments of opposition thinkers like Anne Hutchinson, John Wheelwright and Henry Vane.

Meet the Quakers
What do Quakers Believe? George Fox (1624-1691) founded the Quaker sect, more properly named the “Society of Friends” around 1647 in England.  Fox and his followers believed the power of the Holy Spirit, which they called “the Light of Christ,” to be an Inner Light and that God was within all human beings, speaking to all races and sexes equally.

Quakers were Christians but they did not believe in ordination (having priests or ministers) or any other formal trappings common to other Christian faiths.

Quakers were pacifists, modest in appearance, and dedicated to achieving success in life through following their Inner Light.  Although early on there were Quaker slave traders and slave holders in Massachusetts and Rhode Island, Quakers progressively adopted anti-slavery positions in the mid-18th century.  In England they had been subject to imprisonment and having their goods confiscated by the Crown; this may have led to their reassessment of their involvement in slavery.

How did the Quakers come to settle Southeastern Massachusetts?

Neither Plymouth nor Massachusetts Bay Colony would allow the Quakers to settle there.  In fact, the Puritan colonists were tyrannical in their treatment of the Quakers because they disputed the Puritan beliefs, refused to pay taxes, and refused to participate in local militias or any other military actions.  The Quakers were violently banished by the Puritans and refused citizenship in either colony.  So the Quakers went to Newport, Rhode Island, where Roger Williams, while not enthusiastic about Quaker admission, tolerated different religious beliefs.

By 1664, the Quakers were moving into the friendlier Pilgrim Proprietorship of Dartmouth, Massachusetts along the southeastern edge of the Plymouth Colony, including the island of Nantucket and the region later to become New Bedford.

“Believe in the Light that you may become Children of the Light…”
– George Fox, founder of the Society of Friends, 1658. 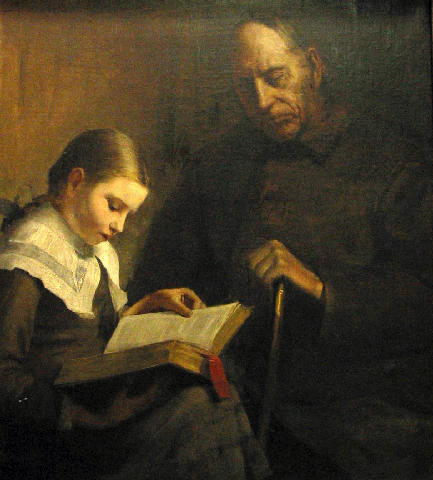 Quaker children were taught that their efforts needed to be placed toward practicality and that decoration should have a use larger than the satisfaction of immediate personal gratification. Many examples of Quaker girls’ needlework, while thoroughly adept, reflect an educated interest in the larger world. Sylvia may have completed this piece while attending the Pleasant Valley Boarding School near Poughkeepsie, New York.