Dive deep into the scenes and stories told throughout the Panorama.

Dive deeper into the scenes and stories told throughout the Panorama with the free audio tour. Walk the Panorama and the tour takes you around the world through the eyes of a whaler.

Introduction to the Grand Panorama

This Panorama authentically depicts a whaling voyage around the world. In an era before the age of cinema, the Panorama traveled the country as a “moving” panorama. It was a performance spectacle, scrolling on giant spools with accompanying theatrics and narration. As you embark on your voyage, note that the Panorama is viewed from right to left, beginning with your departure from the New Bedford Harbor.

About the Artists – Benjamin Russell and Caleb Purrington

The Panorama was painted in 1848 by Benjamin Russell and Caleb Purrington. Russell rightly deserves the accolade of New Bedford’s definitive whaleman artist. Only a few professional American artists ever went whaling, but in 1841 he did on board the ship Kutusoff of New Bedford. Russell hired Purrington, a “fancy” painter, and took it on tour through cities on the east coast.

About the Artists – Benjamin Russell and Caleb Purrington

Looking across the Acushnet River toward the Acushnet Heights section of New Bedford, the railroad passes the Wamsutta Mills cotton cloth factory and a farmer’s windmill dominates the heights. The smoking stack of the New Bedford Steam Mill Company rises in the middle distance. The stack of the Acushnet Iron Foundry on Fish Island also rises prominently.

The North Atlantic Ocean and the Gulf Stream

Bad weather aside, the central North Atlantic Ocean included a number of important sperm whaling grounds. Vessels could cruise along the edge of or south of the Gulf Stream on the Western Grounds or northeast on the Commodore Morris Ground. Powerful storms could develop at any time of the year, but particularly in the autumn and winter months.

Many New England voyages to the South Seas followed the prevailing westerly winds and the Gulf Stream eastward across the Atlantic before turning south. The Azores, a collection of volcanic islands, are located almost exactly at the point where the winds veer southwest, where the Canary Current flows south.

The voyage continues across the open ocean between the Azores and Cape Verde. Of the nine main islands of Cape Verde, all volcanic, the Panorama focuses on São Nicolau, Sal, Santiago, Fogo, and Brava. These islands are directly in the path of vessels bound on voyages around the southern Capes, and as such, were of primary importance to whalers. In April of 1847, the 7000-foot-high volcano...

Among the finest ports of call in the South Atlantic is Rio de Janeiro. Located in a deeply sheltered harbor on the coast of Brazil, its diverse services served the maritime commerce of the region. One needs only to trace the initial sequences of the Panorama—from the Azores, then Cape Verde and Brazil—to understand the extent of the Lusophone diaspora and the one-time might of Portugal as an imperial power.

Ships hunted across a number of prolific whaling grounds off the coast of South America on the way to rounding Cape Horn. Vessels passing Cape Horn eastward into the South Atlantic past Staten Land and the Falkland Islands often came through very heavy weather.

About 400 miles due west off the coast of Chile is the Juan Fernandez Island group. From 1704-1708, this was the fabled home of the privateer Alexander Selkirk, or, as he came to be known from Daniel Defoe’s famous work of fiction, Robinson Crusoe. The region around these islands was also a very popular sperm whaling ground for the much of the nineteenth-century.

Pitcairn, like Juan Fernandez, is another of these fabled islands of the South Pacific with great associated stories. The mutineers of H.M.S. Bounty settled the island after seizing the ship from her reportedly tyrannical master, William Bligh, in 1789. Russell shows several details including the famous Banyan tree under which the Bounty people built their village later named Adamstown, for the patriarch and last-surviving mutineer, John Adams.

This section shows an exciting sperm whaling scene. The action takes place off the high volcanic island of Ua Pou, called Roapoua by whalemen. This island, with its distinctive mountain spires was one of the most often illustrated of the Marquesas group. The natural beauty of the ocean, the birds, fish, whales, dolphins, and other natural phenomena are a recurring theme throughout this painting. For instance, ...

Leaving the Marquesas, the voyage continues southwest toward the Society Islands, the most commonly known of which is Tahiti. Here, the panorama depicts the Essex, a whaler out of Nantucket. While cruising in the Pacific Ocean in November 1820 she was rammed and sunk by a large and furious sperm whale. The crew of 20 men took to the whaleboats and made for the coast of Chile over 4000 miles away.

One of the most famous of all the islands of Polynesia, and beyond a doubt the most important to American history, is the archipelago of Hawai’i. Centrally located in the North Pacific within easy distance of the great sperm whaling region the Japan Grounds and the great right whaling region of the Northwest Coast, and later of the Western Arctic, the deep water ports of Hawai’i became pivotal to the success of Yankee whaling in the Pacific.

The whaling grounds in the northern Pacific Ocean, commonly referred to by 19th century whalers as “the Northwest Coast,” were first discovered around 1835 and were home to a particularly large, and aggressive species of right whale.

The Melanesian Fiji Islands, composed of 154 islands, 64 of which were inhabited, were populated by the most unpredictable and often warlike, people. The Fijis were largely uncharted, or at least, their positions, and the positions of surrounding reefs, sand-banks, rocks, and atolls were “uncertain” at best. Shipwrecks were common and massacres of ship’s crews by the Fiji islanders were legendary.

The end of the voyage, the missing section

The Fijis are the final port of call on this last surviving roll of the Panorama, but they are by no means the final port of call on our voyage ‘round the world... As we conclude our voyage there can be no doubt that the commerce of Yankee whaling encompassed a global embrace. Not only have we touched many shores, but those shores have touched us and we have learned of growth, decline and change while pursuing our extractions from the seas the world round. 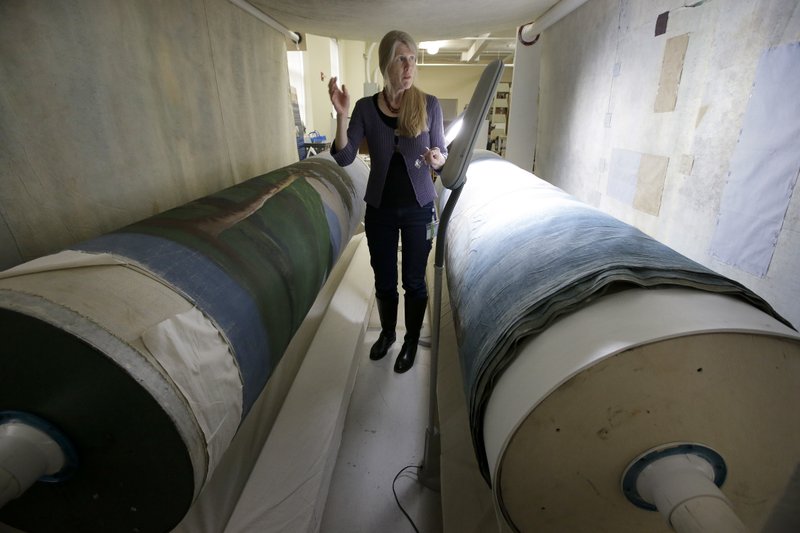