The Beetle Whaleboat is now fully constructed and joined the Charles W. Morgan at Mystic Seaport in 2014 as part of its historic 38th Voyage. Support for this project came from the Museum’s membership and a generous matching challenge from Peter Kellogg.

The slideshow below was provided by Beetle Boat Shop. 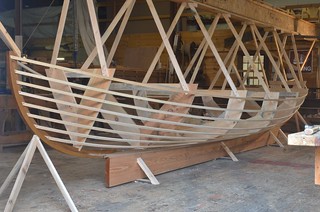 The last surviving whaling ship in America, the Charles W. Morgan, was built in 1841 in New Bedford at the yard of Jethro and Zachariah Hillman.  It was one of 75 whaling ships out of New Bedford harbor that year; (New Bedford peaked 16 years later in 1857 with 329 vessels.)

James Beetle began building whaleboats while working for the Hillmans.  From 1834 – 1854 he built over 1,000 whale boats (or about 50/year), including some for the Charles W. Morgan.  James Beetle had three sons; Charles and John ran the Beetle shop on Rodney French Boulevard in New Bedford, while James Clarence Beetle moved to San Francisco to expand the business for the west coast fleet.  As the industry began to decline after the Civil War, the Beetle family parlayed their expertise into designing and constructing pleasure crafts.

In 1921 the Charles W. Morgan embarked upon her last sail and retired at Colonel Edward H.R. Green’s estate at Round Hill in South Dartmouth.  Ironically, it was that same year that John Beetle built the first 12’ Beetle Cat sailboat; still a popular design today and built locally in Wareham.  Using cedar and oak, the same materials Beetle whaleboats were composed of, the sailboat quickly caught on as a one design racing fleet at yacht clubs across New England.

During Col. Green’s restoration of the Morgan in 1924, he asked Charles Beetle to build a whaleboat for the ship as his father had done many years before.  The last Beetle whaleboat was built by Charles in 1933 for the Mariner’s Museum in Newport News, VA.  This whaleboat would become significant later, as its lines and construction plans became part of the Mystic Seaport plan collection in 1973 and were used by the Beetle Boat Company to construct our new whaleboat.

On September 8th, 2013 an historic race between the Beetle whaleboat and Azorean whaleboats took place during the 7th Annual International Whaleboat Regatta.