King Philip’s War – The Most Devastating War in American History 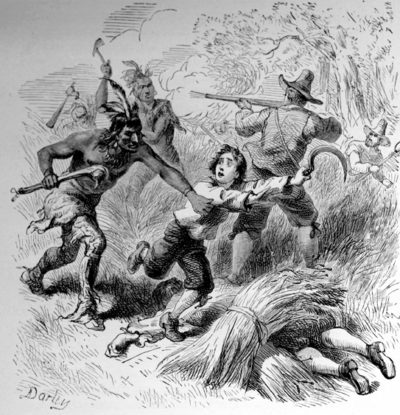 By the 1670s, the settlers’ numbers in Massachusetts swelled to 50,000, while Native American populations were radically reduced by European diseases. Traditional Native American food supplies dwindled as hunting grounds vanished. Additionally, Native Americans were fast losing their culture and identity. Conversion to Christianity was common, and a dependence upon English goods such as firearms and metal tools was inevitable. While some colonists were willing to buy land, many others took what they wanted. The very idea of “owning” the land was an alien concept to Native Americans. This led to misunderstanding and turmoil.

After more than fifty years of trying to co-exist, Native Americans took action and started what would become per capita the most devastating war in American history: King Philip’s War (1675-1676). By the end of this bloody conflict, thirteen settler’s towns were destroyed and fatalities included many women and children on both sides.

King Philip, Massasoit’s son, led the campaign by creating a loose confederation of tribes who were frustrated by the colonists’ greed, mistrust of the natives, and their policies which institutionalized inequality.

While the colonists ultimately won King Philip’s war, the spoils of victory would stain our country’s conscience forever – the colonists enslaved over a thousand Native Americans and sent them to work the plantation farms in the West Indies.

“Those coals of Discention which had a long time lain hid under the ashes of a secret envy; contracted by the Heathen Indians of New-England, against the English; and Christian Natives of that Country brake out in June 1675.” –News from New-England… (London, 1676).

Who was King Philip? Why did he have an English name?
Born Metacomet, the son of Massasoit, King Philip was a Wampanoag sachem who took the English name Philip around 1660 as a diplomatic gesture to the Pilgrims (his brother, Wamsutta, also took the English name Alexander). Since both were leaders of their people, the prefix “King” was added to their names to show their equality to other sovereigns like England’s King Charles.

Who was Benjamin Church? When the war broke out, the colonists called upon Benjamin Church to lead the colonial military response. Church had proved himself a resourceful settler in the Little Compton area and had befriended a nearby tribe (the Sakonnet) that chose not to fight. Church ultimately led the colonists to victory, but not before too many massacres and horrific sieges had been waged and thirteen settlers’ towns had been destroyed.

How Old Dartmouth fared in the War

In July of 1675, one of King Philip’s followers, Totoson, led the attack on the settlers of Old Dartmouth. This campaign spread through the south coast from Mattapoisett to the banks of the Apponagansett River in Dartmouth. For protection, the settlers fled to their garrison houses including the Russell garrison, along the river in Dartmouth, and the John Cooke garrison, along the Acushnet River in Fairhaven. Dartmouth’s settlers suffered a major defeat; many were slain and all their homesteads were burned (which is why we have very few 17th century houses left in Dartmouth today).

At its height in 1676, King Philip’s War extended over 300 miles from Hatfield in Western Massachusetts to Weymouth and south to Warwick, Rhode Island.

In this area, five percent of the white population was killed and forty percent of the native population, including many women and children on both sides. Many  members of the Sakonnet tribe were spared, however, as their female sachem, Awashonks, made an agreement in 1676 that her people would assist Benjamin Church as scouts and fighters.

The war almost eliminated the Pokanoket tribe of the Wampanoag and King Philip himself was killed. He was slain by a Praying Indian named John Alderman, although in some early accounts of the battle, Captain Benjamin Church was credited with his death. King Philip died near his camp in Mount Hope close to what is now Bristol, Rhode Island.

Most of Rhode Island was spared in the war in recognition of Roger William’s more even-handed treatment of Native Americans and respect for their lands.

Who Were the Praying Indians?

Since the Puritans and the Pilgrims felt they had to save the “heathen” souls of the Native Americans, much effort was spent toward converting them. “Praying Indians” referred to those Native Americans who embraced Christianity and lived in-between two cultures.

When King Philip’s war broke out, the Praying Indians were caught in the middle. They played an important part in this war, but their loyalties were inconsistent. They were not trusted completely by either party.